An Asian starch factory was able to save $90,000 in the first year alone after digitalizing their plant and implementing METRON’s EMOS. They successfully optimized the operation of their on site cogeneration system (based on a steam boiler and steam turbine to generate electricity) in order to leverage the different electricity prices during the day. Read our full article to find out how they were able implement the solution and see results.

Digitalization & agri-food: context and issues of the mission

A starch factory in Asia

The plant produces starch for the food industry: modified starch, sugar starch, etc. Its energy bill before the digitalization of its industrial processes was $10.9 million for the consumption of 55,000 MWh / year of electricity and 50,000 t / year of coal.

For its energy production, the starch factory is equipped with :

The steam required for the production lines is produced by the boiler and passes through the turbines. If the production exceeds the demand, 100% of the residual steam is used to generate electricity. The electricity demand not covered by the turbo generators is imported directly from the public grid. 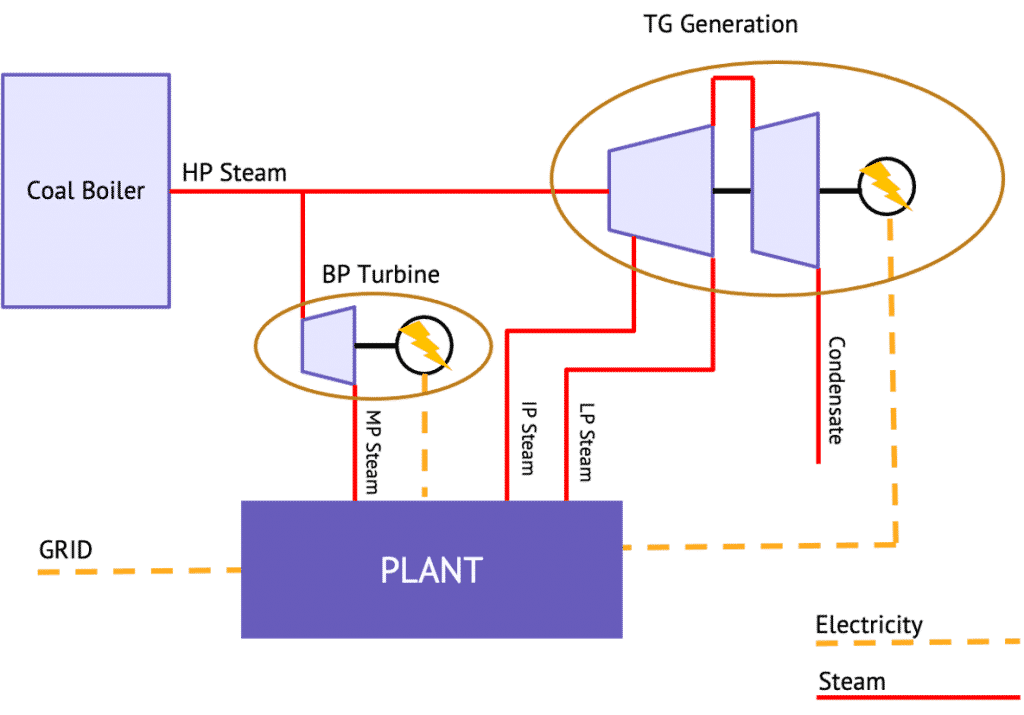 The major challenge of digitalizing the food processing plant was to identify the variables with the greatest impact on steam consumption, and to make the most of the existing assets' flexibility. With one important parameter to take into account: the electricity produced on site comes at a fixed price (due to their fuel supply contract), while the energy imported from the grid has a variable cost.

WANT TO LEARN HOW AN EMOS CAN HELP YOU RESPOND TO FLUCTUATING ENERGY PRICES? DOWNLOAD OUR DEMAND SIDE MANAGEMENT E-BOOK >

The project for the digitalization of the cogeneration processes had to meet a double objective:

To define the energy management rules, monthly monitoring was carried out in an Excel file. The KPIs analyzed mainly concerned the production, and steam consumption was monitored in relation to production and the volume of coal used.

Steam production was constant, irrespective of production costs and the cost of electricity imported from the grid. Excess steam was then recovered in the turbo-generators for electricity production.

Implementation of the METRON solution

The implementation of the METRON solution took less than 3 months.

Definition of the architecture and data collection

By interoperating with the existing systems, a large amount of energy and industrial process data could be collected thanks to 2,500 indicators. More than 600 data per second were then transferred directly from the plant's OPC server to the METRON platform. Two years of history, dating back to the inauguration of the starch factory, were thus recovered.

More than 100 variables influencing the boiler and turbines were analyzed:

Coupled with human expertise and METRON's data science knowledge, the digitalization of the equipment and data contextualization made it possible to build the analysis and baseline models to quantify the savings of the project.

This step enabled the automation of the first actions and the comparison of the equipment performance with reference scenarios.

Creation of dashboards to monitor usage in real-time

With the METRON solution, plant operation can be monitored in real-time:

Thanks to the model of the plant, and taking into account the energy supply contract, several optimization actions have been implemented. In particular, a rule was defined to minimize, or maximize, the production of electricity generated internally.

In the second phase of the project, real-time recommendations were provided to the operators present on site. The algorithms now use the internal and external data transmitted at any given moment to determine the optimal power mix for the expected production.

When electricity prices are high and steam demand is low, the EMOS platform suggests, for example, using more electricity produced by steam turbines, whose fixed cost is lower than the variable cost of grid electricity.

In all cases, it is up to the energy manager and the operations team to decide on the adjustments identified and to apply or not the optimizations suggested by the platform.

The savings in the energy budget amount to $90,000 per year. Thanks to the support provided by the EMOS, the starch factory can now optimize the cost of its energy mix in real time.

A digital and and centralized Energy Management and Optimization system can save 4 man-days each month in the management of energy resources. From now on, the operators present on site can devote themselves to tasks with higher added value.

The importance of an energy culture

In energy management, the human dimension is essential – everybody must be made aware of the stakes of a data-driven energy culture. The real-time digital energy management approach makes it possible to transmit the right information, at the right time, to the right user. Thanks to clear and relevant data, the plant is more transparent for everyone, making it easier for teams to get involved and work together.

The accurate, real-time view of the starch factory's power production equipment allows plant personnel to adjust boiler and turbine operation according to set production targets and the variability of the energy market. By combining human expertise with data science algorithms, the METRON platform makes it possible to compare consumption with a reference model, and thus to use the full potential of cogeneration by balancing internal and external energy sources at all times.

See our EMOS in action

Take part in an interactive demo and discover how to improve your energy transparency in 3 months with METRON:

Talk to one of our experts

Discover more articles on our Blog

What is an EMOS – Energy Management and Optimization System?

GHG Protocol: How Going Digital Can Help You With Compliance

The Reasonable Use of Data, a Condition for Energy Sovereignty

Hourly PLD: How to Manage Your Energy Consumption