Limiting global warming to less than 1.5 degrees Celsius above pre-industrial levels: this is the ambitious goal set by the Paris Agreement in late 2015. And according to the IPCC, the only way to achieve this is to reach zero net carbon emissions between 2050 and 2070. In each of the 195 countries that signed the agreement, incentives have been adopted to begin our transition to a low-carbon, circular and sustainable economy, particularly in the industrial and tertiary sectors.

More and more companies are adopting a long-term roadmap to reduce their greenhouse gas emissions. To accomplish this, it is essential to understand and distinguish between the two fundamental concepts: action levers, which can be mobilized to reduce your carbon footprint, and scopes, which correspond to the different perimeters of the company's value chain. Let's take a look at these two concepts which are essential to understand in order to set up your decarbonization roadmap.

Decarbonizing your activities: the 4 levers of action

In a given area or geographical region, the energy mix indicates the level of distribution between the different primary energy sources, whether fossil or renewable. Currently, more than 80% of the world's energy mix is made up of fossil fuels. The challenge here is to reduce our dependence on carbon-based energies and to replace them with renewable energies, including nuclear power.

Any company can work to green its energy mix by mitigating the mix of its supply network with renewable energies produced on site: by installing solar panels and wind turbines, using biogas, or setting up a cogeneration system to capture the heat emitted by certain production processes to produce electricity for self-consumption.

Greening the energy mix is a way for a company to strengthen its energy resilience. It is a question of guaranteeing the continuity of its operations in the face of the scarcity of fossil fuels, while taking into account the variation in renewable energy sources ( solar, wind...).

The objective of this action lever is to reduce energy demand. How can we do this? By eliminating certain uses (changes in behavior, strategic choices, etc.) and limiting ourselves to essential energy needs in individual and collective uses.

Energy sobriety can be understood in 3 different ways:

Energy sobriety concerns both renewable and non-renewable energy. In this respect, the challenge is to successfully standardize and integrate the notion of responsible consumption of resources into everyday life.

This means reducing energy consumption, regardless of the supply mix, while maintaining the same level of production or service. In practice, improving the energy efficiency of a company requires :

Energy performance is a lever to be prioritized in any Decarbonization roadmap, as there are many advantages:

Energy performance is a fundamental element in reconciling business growth and environmental issues. By improving energy efficiency, an organization usually increases productivity, with significant savings at the end of the day.

Unfortunately, this lever is not given enough consideration, especially in government support mechanisms. Yet 40% of the decarbonization objectives set out in the Paris Agreement are related to efforts in the area of energy performance!

This initiative was created by the Kyoto Protocol, which came into force in 2005. It allows an organization to offset its CO2 emissions by financing projects that work towards:

Some companies, such as Microsoft, have decided to go beyond the carbon neutrality requirements set for 2050 by offsetting their past CO2 emissions over the coming years also.

Although carbon offsetting is one of the least mature action levers, technologies are developing quickly. This is particularly the case for the creation and development of natural or artificial carbon sinks.

Energy mix, sobriety, performance and carbon offsetting: these 4 action levers can be activated one after the other or implemented in parallel, depending on the capacities and resources of each company. However, their activation requires dedicated funding and digital tools to collect and analyze energy consumption within a company. 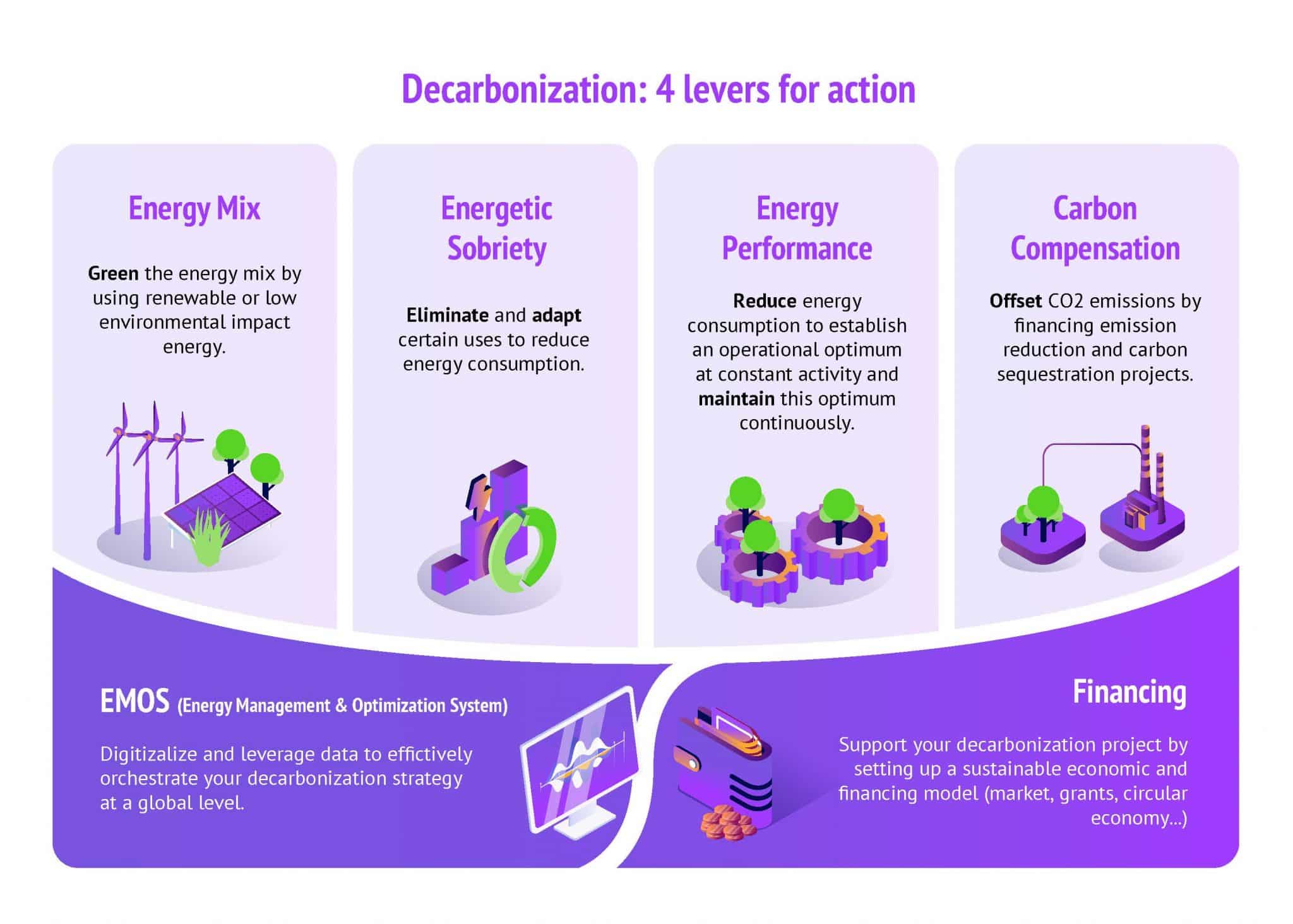 The Scopes: the perimeters in which the 4 action levers are applied

Scopes 1, 2 and 3 have been defined by the GHG Protocol, which provides an international framework for measuring and managing greenhouse gas emissions. They correspond to the different perimeters within which greenhouse gas emissions are studied. It is important to be able to quantify the impact of activities on each scope in order to determine reduction targets and prioritize actions to be implemented. However, some items in these scopes remain difficult to measure.

This framework, which is the most restricted, concerns emissions related to the consumption of fossil fuels (fuel oil, coal, natural gas, etc.) by a company in the course of its activity, by its equipment or buildings. Four categories of emissions are included in this scope:

Upstream emissions related to the provision of fuels (extraction, transport, refining, etc.) are also taken into account within this scope.

These are the emissions generated by the production of transformed energy (electricity, steam, heat, etc.) from fossil fuels. In concrete terms, indirect emissions are associated with:

the purchasing of electricity, which is produced from a primary energy source available in nature (oil, gas, uranium, solar energy, etc.)
the use of heating or cooling networks (for example, when a company obtains steam, the production requires the use of fuels, which emit greenhouse gases).

This is the broadest scope. It includes emissions that are not directly generated by the company but by its suppliers and service providers, upstream and downstream of its own activity:

If the creation of a Decarbonization roadmap is a construction based on 4 levers that can be activated within 3 distinct scopes, it must above all be based on a clearly defined energy performance strategy. The creation of such a strategy is achievable for any company through the use of data. Digital tools will help you consolidate, compare and orchestrate this decarbonization strategy efficiently. 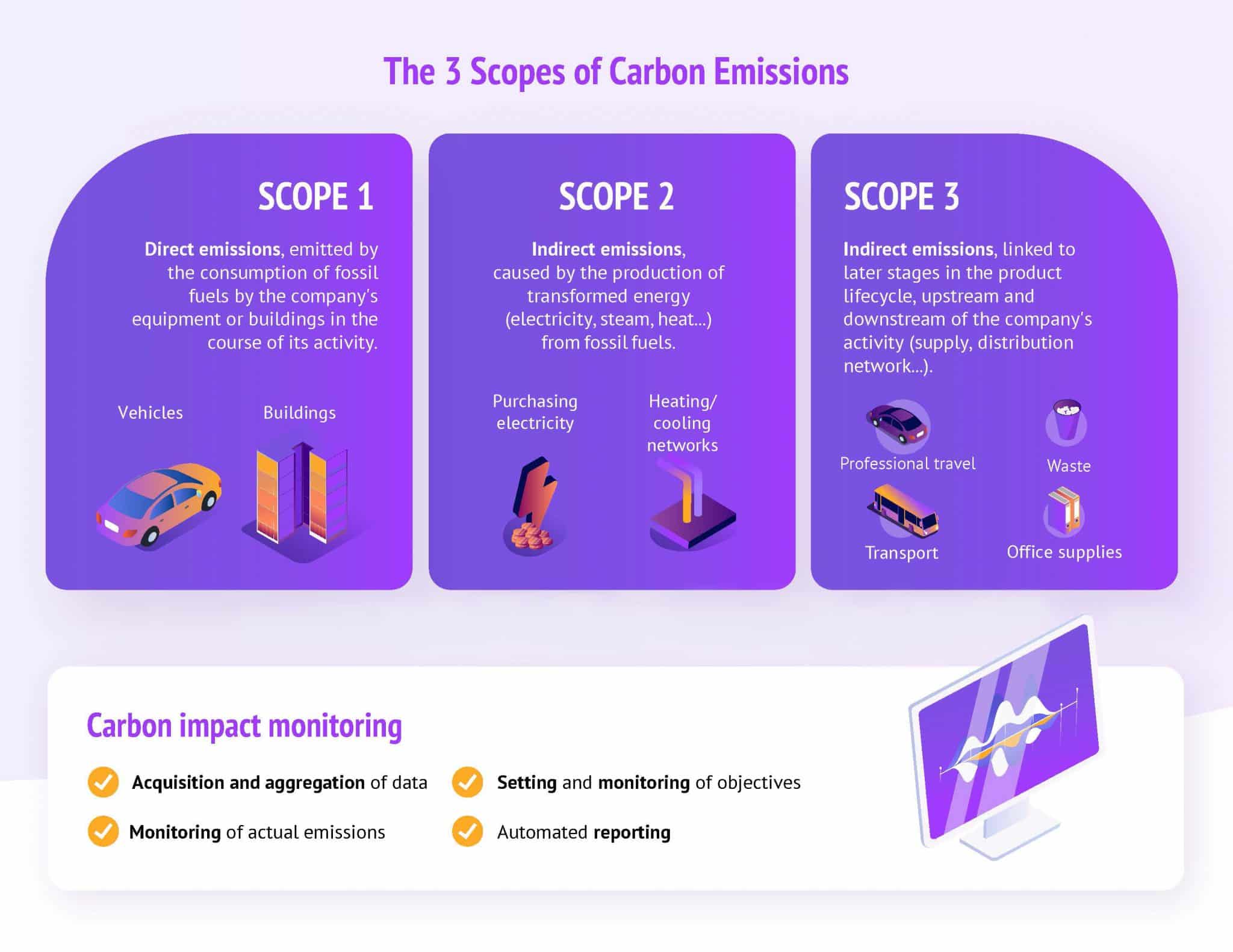 Would you like to be supported in your organization's decarbonization strategy?

TALK TO OUR EXPERTS

Discover more articles on our Blog

What is an EMOS – Energy Management and Optimization System?

GHG Protocol: How Going Digital Can Help You With Compliance

The Reasonable Use of Data, a Condition for Energy Sovereignty

Hourly PLD: How to Manage Your Energy Consumption